In Chappaqua, a hamlet just outside of New York City, two elderly widows keep house. Despite looking like grandmothers who have nothing more important to do than mop the kitchen floor, the two women originally from Afghanistan and Palestine are not who they seem. 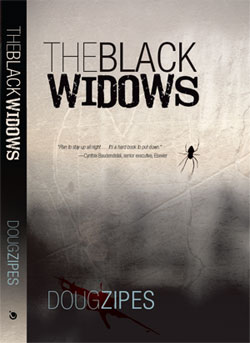 From a back room in a small secondhand bookstore attached to their house, Mrs. Abramowitz and Mrs. Silverman control the Black Widows, a worldwide terrorist organization created with a dual purpose—to wage a personal vendetta and destabilize the Western world. When Zach Dayan, a NYPD detective and former Israeli policeman, takes on the case, he is challenged by a series of apparently random, horrific murders with the same brutal chest slashings. He seeks help from his ex-lover and expert pathologist, Dr. Jayanti Joshi. After examining the hearts, Dr. Joshi quickly discovers the common thread of the murders, but unfortunately, the clue leads nowhere.

Zach’s search for the murderer leads him to the hidden caves of Petra, an impenetrable ancient desert city, where he is soon swept into the bowels of an evil plot as he tries to save the Western world from another Holocaust.

Order your copy of The Black Widows today

Use the buttons below to order your copy today.

The Black Widows was a 2011 Book of the Year Award Finalist selected by ForeWord Reviews.

“Wahad, code name for ‘the first,’ slipped into the building, past the guard sleeping in front of the bank of four gray elevator doors. Despite the weeks of careful training, Wahad’s heart raced. The first kill was always the toughest. The guard shifted position, his regular breathing briefly suspended, and Wahad tensed. The BW’s instructions did not include killing the guard, but being seen going in or out of the building was not an option. Wahad reached deep into a large pocket of the black unisex army trousers and took out the stainless steel Bard Parker scalpel. The #10 razor-sharp blade was capped but already in place for the surgery later. The guard started to raise his head from the desk, eyes blinking rapidly to adjust to the light. Wahad pounced, one hand grabbing the guard’s hair to pull his head back, and with a quick slash it was all over. Messy but finished.

Wahad unfolded the floor plan and walked quickly to the corner office. Inside, Karen Driver hunched over her computer, her back to the door. Wahad crouched, sitting back on shoe heels, took out the .38 hand gun and tried the door.

Karen stopped typing at the creaking noise and Wahad ducked out of sight just before she swiveled around. She rose and went to the door, opened it and peered outside. “Anybody there?” she called tentatively into the dark hall, shrugged her shoulders and returned to the computer. Wahad moved back into position and decided to shoot through the window. Charging into the room would certainly make her spin around and probably force a chest shot, which was unacceptable. She had to die by a head shot, clean.

Suddenly the phone rang and Karen leaned far left to reach the receiver. The angle now made the head shot risky because the bullet, not hitting the window straight on, could ricochet off line. “Yes, Kenneth, I’m still working,” Wahad heard through the thin door. “Pretty soon. Another twenty minutes or so.” She paused, listening. I miss them too. Did they eat all their dinner? I’ll stop for Chinese on the way home. Hot and sour soup, pot stickers, and chicken chow mein, as usual? We’ll have a quiet dinner together once they’re asleep. Love you too. Bye.”

The conversation lingered in Wahad’s mind. A waiting family marginally undermined the moment’s anonymity, but Wahad easily fended off the sentiment, slipped a finger through the trigger guard, aimed and slowly squeezed, thinking of the trigger on Windex. A fraction of a second after the soft pop, Karen slumped forward. Wahad picked up the bullet casing, entered the unlocked office and began the surgical procedure. Number one was completed. Nine hundred ninety-nine to go.”

The Black Widows is first rate!, January 10, 2010
by Mike the Bookie
I picked up the book one afternoon and wound up doing a straight-through read on it, finishing it a little after midnight. The author keeps the reader hooked throughout: the story gains its own momentum. If you are into the espionage-terrorist-genre, this is a must read!

This is a real page turner, February 14, 2010
by Cass Wheeler
The author grabs you immediately and doesn’t turn loose until the very end. He takes you on an adventure with many twists and turns. His character development is superb and you feel like you know each person and he brings the scenes and sequences to life. Don’t miss this great read. Can’t wait for the author’s next novel.

Up-to-date thriller – terrorism with a medical twist, February 12, 2010
by C. Rudiger
Definite page turner. I liked the use of real places with great descriptions and believable characters and situations. Brings in real medical knowledge too.

Glued to my seat, February 8, 2010
by Mj Janse
The trouble with this book is that, once you start reading, you can’t put it down. I loved it. The medical background of the author is evident from the brilliant plot, which, unfortunately, I won’t reveal. The book is very well written, and is a must for everyone who loves thrillers.

A must-read thriller, January 28, 2010
by Cynthis Baudendistel
This is a must-read for fans of thrillers. With strong leading characters and a complex, but thoroughly believable, plot the story moves quickly and seamlessly from New York to Jordan. The author’s background as a cardiologist makes the medical aspects of this thriller interesting without getting bogged down in medical jargon or details. Plan to stay up all night, though – it’s a hard book to put down.

Exciting Read!, January 11, 2010
by D Bookworm
Loved it! Great characters, fast-paced, exciting, could’t put it down. Loved the inside scoop into Dr Zipes’ medical world too.

The Black Widows, January 11, 2010
by Gracie
I loved it- very fast read- kept me on the edge of my seat throughout! Reminds of the book “Coma” only better. If you like suspense, don’t pass this one up!

If you want to sleep then don’t pick up this book!, January 10, 2010
by Book Doctoer
Wow! What a fantastic ride all over the world. The characters are fascinating and the plot full of intrigue. I couldn’t put this book down- from start to finish it is one heck of read.

The Black Widows by Doug Zipes,is a page turning feast…………….

Posted January 14, 2010, 12:40 PM EST: Doug Zipes has written a compelling international thriller replete with memorable cops, hot women and steely assassins. Driven by vengeance, we follow a heinous plot of holocaust proportions as it weaves its way through the Big Apple, the Middle East and points in between. Amidst a backdrop of modern day terrorism, the author spins a page-turning feast which will satisfy your appetite with ambiance, stick-to-the-ribs characters, and medical tidbits for dessert.

In this tense, fast-moving thriller, murder victims are turning up with their chests slashed. NYPD Detective Zach Dayan, an ex-Israeli cop, needs plenty of wit to connect the seemingly unrelated cases from around the country. Working with his junior partner Harry Scarpia, he witnesses autopsies and queries a cardiologist friend for advice—while young Harry may succumb to the wiles of a sexy suspect who has a great body and a .45-caliber handgun she calls Boom Boom. Before getting into police work, Zach had spent two years as a medical student, which serves him well in this case. The first autopsy scene may remind mystery fans of Tess Gerritson’s gasp-inducing cadaver cut-ups—this is meant as high praise. There is also a spectacular scene where an unknown assailant runs Zach’s car off the road and sends him to the Emergency Room.

Meanwhile, what are the killings about? All of the victims have something sought by a pair of apparently harmless Jewish women, Ruth and Sarah. Author Doug Zipes takes readers through a number of sharp twists that come back to the Black Widows, a secret group of Arab women whose husbands have fallen in the service of jihad. Nothing will suit these women but utter, blind vengeance against the West, and the individual killings are but a prologue to a main event the world will never forget. Meanwhile, Zipes weaves in plenty of back story without slowing the overall pace.
The only concern about The Black Widows is the sense of a world divided between the good guys of the West and the bad guys of Islam. The world doesn’t need or benefit from such stark divisions. Fortunately, Zipes slightly softens that impression late in the book.

Many of the chapters feature Zach Dayan’s first-person point of view, and he comes across as a decent man whose ex-wife Miriam and children still love him. Other chapters show the shadowy Wahad, who assists the Black Widows in exacting their vengeance. In his path of discovery, Zach comes in for serious unpleasantness while tension escalates at a brisk pace that moves literally to a cliff’s edge.

Zipes himself is a cardiologist and a Saturday Evening Post columnist. Readers will sense that he knows his way around morgues and ERs. The Black Widows equals the quality of traditionally published thrillers in every way and stands out as one of the best in a sea of thrillers.